You will receive both the Physical Card as well as the NFT:

Everyone knows the man that helped turn a small Chicago basketball team into a dynasty, Michael Jordan.

Even those who aren’t sports fans know of him and his talent on the court. 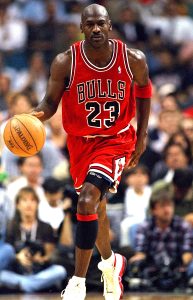 7 Jan 1998: Guard Michael Jordan of the   ChicagoBulls in action against the Miami Heat during a game at the Miami Arena in Miami, Florida. The Heat defeated the Bulls 99-72. Credit: Andy Lyons /Allsport

Michael Jordan is viewed one of the most famous athletes in history and some people go as far to say that he is the best basketball player to have ever played the game.

He is also well-known for his own line of collectible cards.

His cards are extremely popular among card collectors because they can create nostalgia and take the collector on a journey that reminds them of symbols that express Michael Jordan’s life story as a basketball player.

His cards are still collected and well sought after all over the world.

Michael Jordan has many other basketball cards from the 80’ 90s and beyond. In the traditional world, almost all of Michael Jordan’s Cards are physical cards with no NFT representation.

I recall as a kid getting excited every time I opened a pack of basketball trading cards, hoping that there would be a Michael Jordan card inside.

In the traditional word, a collector can only showcase his collection when someone visits his collection. He can’t authenticate that a digital representation of the card, indeed belongs to him or her.

When I was a young collector, there was no way for me to authenticate or tokenize any physical product other than displaying the physical cards. Moreover, I was only able to show this to a small number of people.

Welcome to the World of NFT’s

Ravencoin was created for tokenizing assets/ real world objects. The NFTs that people can buy can become digital representations of items such as Michael Jordan’s basketball card.

Ravencoin NFTs are a new way for collectors to take their favorite items such as Michael Jordan basketball cards and turn them into tokens.

NFTs are not only an exciting new technology, but they offer some benefits that traditional collectibles can’t provide.

A Non-Fungible Token (NFT) contains information about one unique thing. This could be an asset or any other kind of data structure that you want to represent with a token. For example, your favorite Michael Jordan basketball card is an asset and it can now become a NFT!

There are several reasons why NFTs are better than other types of digital assets. Let us look at some of the advantages that NFTs provide:

Ownership — You can own a particular token and be assured that no one else has ownership over it, not even someone who claims to have sent you the same asset before!

“NFTs are unique tokens that can track one-of-a-kind assets, including collectibles, game items, and other real world objects.”

A tokenized object contains a history of who has owned it and where it is currently located. This history can be used to track standard assets such as an antique car or a collectible trading card.

Traceability — The history of ownership for an NFT is written to the blockchain, which means that it cannot be changed or erased. This provides authenticity and therefore more trust when trading assets than traditional collectibles where you must rely on a 3rd party.

Proof of Authenticity- An NFT contains a record of ownership, but in order for someone to have the most up-to-date information on that specific NFT, they can request additional information from a 3rd party. For example , if you own an Michael Jordan basketball card and it gets stolen or lost, you could create a claim on your asset by sending proof of authenticity (e.g. a picture of you holding the card) to an NFT issuer, who would update their records with this new information for anyone interested in verifying the authenticity of your basketball card.

This is perhaps the first time a MICHAEL JORDAN Basketball card has been tokenized on the Ravencoin Blockchain.

The highest bidder will get both the Physical Card shipped to their door as well as the NFT.

See link below to view in asset explorer:

There are no reviews yet.

Only logged in customers who have purchased this product may leave a review.

No product has been found!

We use cookies on our website to give you the most relevant experience by remembering your preferences and repeat visits. By clicking “Accept”, you consent to the use of ALL the cookies.
Do not sell my personal information.
Cookie SettingsAccept
Manage consent

This website uses cookies to improve your experience while you navigate through the website. Out of these, the cookies that are categorized as necessary are stored on your browser as they are essential for the working of basic functionalities of the website. We also use third-party cookies that help us analyze and understand how you use this website. These cookies will be stored in your browser only with your consent. You also have the option to opt-out of these cookies. But opting out of some of these cookies may affect your browsing experience.
Necessary Always Enabled
Necessary cookies are absolutely essential for the website to function properly. These cookies ensure basic functionalities and security features of the website, anonymously.
Functional
Functional cookies help to perform certain functionalities like sharing the content of the website on social media platforms, collect feedbacks, and other third-party features.
Performance
Performance cookies are used to understand and analyze the key performance indexes of the website which helps in delivering a better user experience for the visitors.
Analytics
Analytical cookies are used to understand how visitors interact with the website. These cookies help provide information on metrics the number of visitors, bounce rate, traffic source, etc.
Advertisement
Advertisement cookies are used to provide visitors with relevant ads and marketing campaigns. These cookies track visitors across websites and collect information to provide customized ads.
Others
Other uncategorized cookies are those that are being analyzed and have not been classified into a category as yet.
SAVE & ACCEPT
Skip to content